If we're going to raise the bar in non marking solid telehandler tires, let's go all the way

Learn More
back to products next product 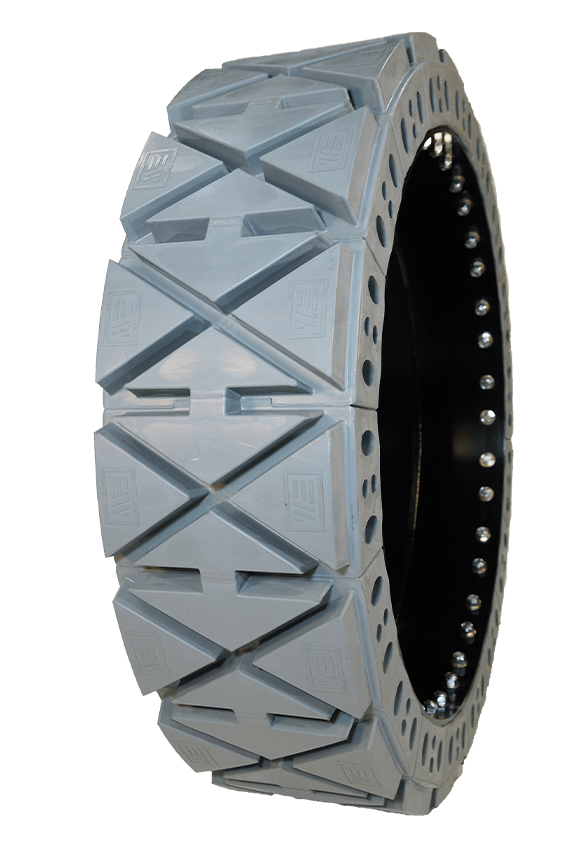 * Also Available in our All Terrain Tread Pattern

The EWRS-TH-NM series of non marking solid telehandler tires were designed to meet the needs of today's job site demands. We came up with a way to offer you serviceability, traction and maximum stability all in one! Plus the added benefit of our proprietary non marking compound means you don't need to worry about leaving marks on fresh concrete where you don't want them to be.

How many pneumatic or foam filled telehandler tires have you had to change on your jobsite because of damage or sidewall gashes? With health and safety being as important as it is today a serviceable option was needed. Our team of engineers developed our EWRS-TH-NM series of non marking solid telehandler tires to be easily repaired if damaged, although were not sure you will need to with the quality that went into our design and components.

With serviceable tire sections, the need for a service truck and specialized technicians is all but eliminated. We have reduced your service tooling down to only a 15/16" wrench in your operator's back pocket and repair parts are readily available in your nearest onsite storage container or in the toolbox of your pickup.

Telehandlers work under a variety of conditions but one thing remains the same, safety is paramount. For this reason, we designed our EWRS-TH-NM series with maximum stability and load bearing capacity. A combination of our specially engineered core hole design and bidirectional tread pattern provide a very consistent and predictable loading profile.

To learn more about the EWRS-TH series of non marking solid telehandler tires, give us a call or submit a quote request to speak with one of our product specialists. We will match the right tire to your specific jobsite needs. 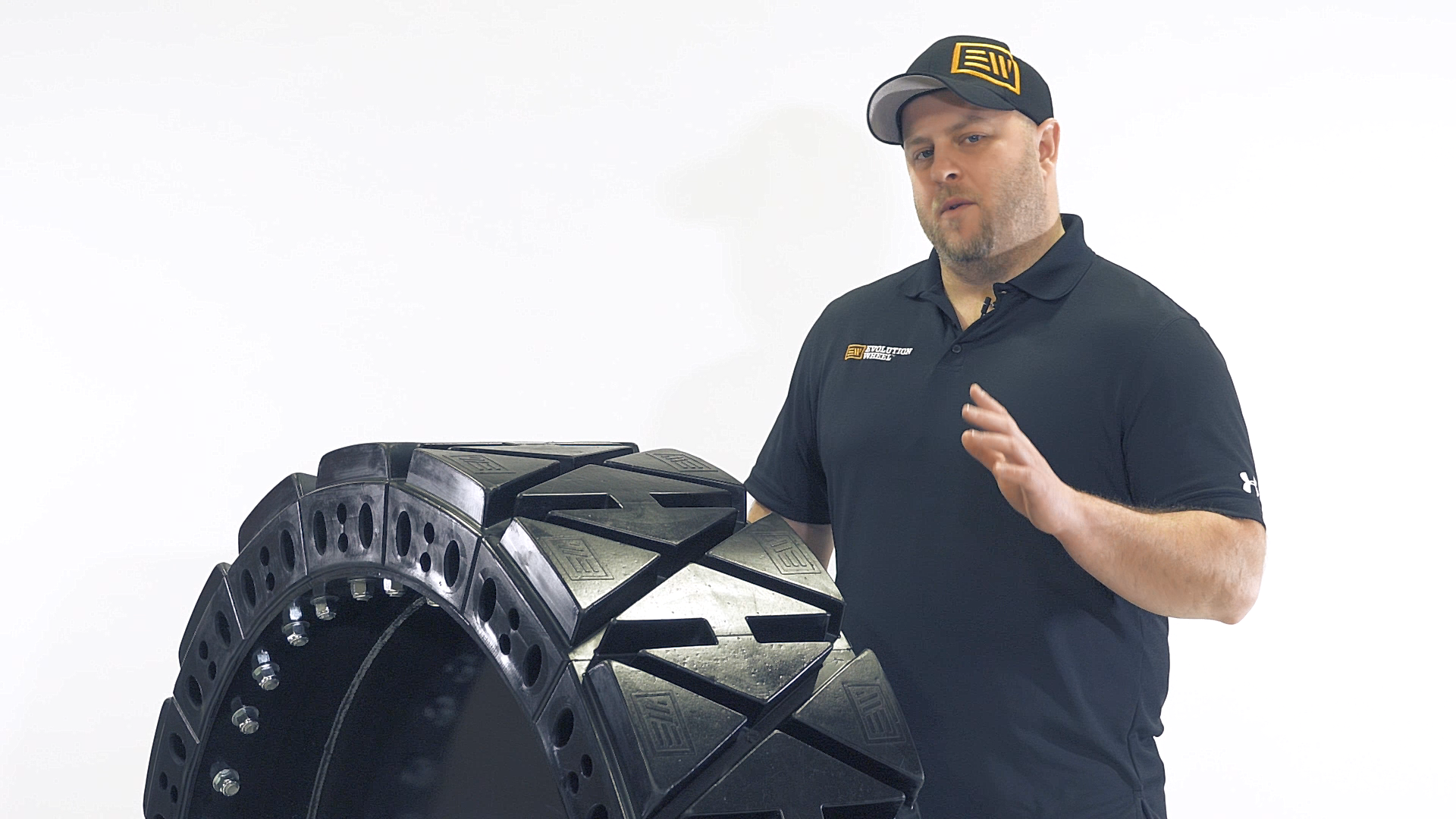 Telehandlers are among the most versatile options in the world of lifting machines. A telehandler differs from a regular forklift in at least two key ways. First of all, the lifting attachment incorporates a telescopic boom, allowing the telehandler to work at distance. More specifically, many telehandlers have reach capabilities of up to 54 feet.

The second unique feature of a telehandler is that it is mounted on a four-wheel-drive chassis. In other words, all four tires on a telehandler can turn. This gives the telehandler a degree of maneuverability far greater than that of a traditional forklift. Yet it also introduces certain problems where tires are concerned. This article identifies one such problem: tire marks, as well as the right tires to avoid it.

As discussed above, maneuverability is one of the telehandler's greatest strengths. These machines can move nimbly in even the tightest of circumstances. Yet as all four of a telehandler's tires twist and turn, they often leave black skid marks on the operating surface. If you happen to be operating on an unfinished construction site — or bare earth — this doesn't pose any real drawback.

Yet telehandlers are often used on finished concrete floors of construction sites. Naturally black rubber skid marks represent a liability in such conditions. The same risk applies for telehandlers used for interior construction projects, and in warehouses where black marks are not acceptable. Normal telehandler tires cannot be used in such scenarios.

The solution to this problem comes in the form of non marking solid telehandler tires. As you can probably deduce, these tires won't leave unsightly black marks on floors. As a result, you won't face the need to undertake laborious floor cleaning efforts at the end of the job. Meanwhile, a non marking solid telehandler tire offers virtually all of the same performance benefits as regular tires.

Aside from these considerations, selecting a non marking telehandler tire is much like selecting a traditional tire as you must decide between many tire options. One option is a press-on non marking solid telehandler tire. They are fairly easy to install but less durable, are prone to chunking so they often need to be replaced before you ever get the full wear life out of them. They are also more labour intensive to remove resulting in higher overall costs. Not to mention the need of specialized equipment to press the tire onto the rim adding more costs.

Another option is pneumatic non marking telehandler tires which are less costly to purchase but come with issues such as frequent flats, added safety concerns, increased downtime and labour costs for repairs, and significantly reduced life span. Furthermore, with recent American National Standards Institute (ANSI) standards in effect, any sidewall cuts, gashes or chunked treads means that the tire needs to be replaced immediately regardless of the amount of wear that is left on the tire.

For these reason, non marking solid telehandler tires is overall the best option for most applications. Although they are more costly upfront, this is quickly offset as they offer great advantages such as extremely high wear life, low maintenance and repair costs, zero flats, and increased productivity. Non marking solid telehandler tires offer huge advantages, since you won't have to worry about suffering flats or blowouts, pressing on your tires, filling them with foam or replacing them prematurely because of tire damage which are all costly and can be a significant safety concern.

A superior non marking solid telehandler tire option to consider is Evolution Whee's segmented non marking solid telehandler tire. Individual segments are bolted to the rim which offers the additional feature of easy serviceability and huge cost savings. If a lug is torn off and needs to be replaced because it’s a safety concern, the advantage with segments is that the tire can remain on the machine and the individual segment can be removed and replaced all with just a standard wrench. When chunking occurs with press on, pneumatic or foam filled non marking telehandler tires, ANSI standards require that the tire be replace immediately. This leads to wasted time and money.

Let us help you spend more time on the job and less time and money fixing and replacing tires.

QUESTIONS? COMMENTS? SEND US AN EMAIL.